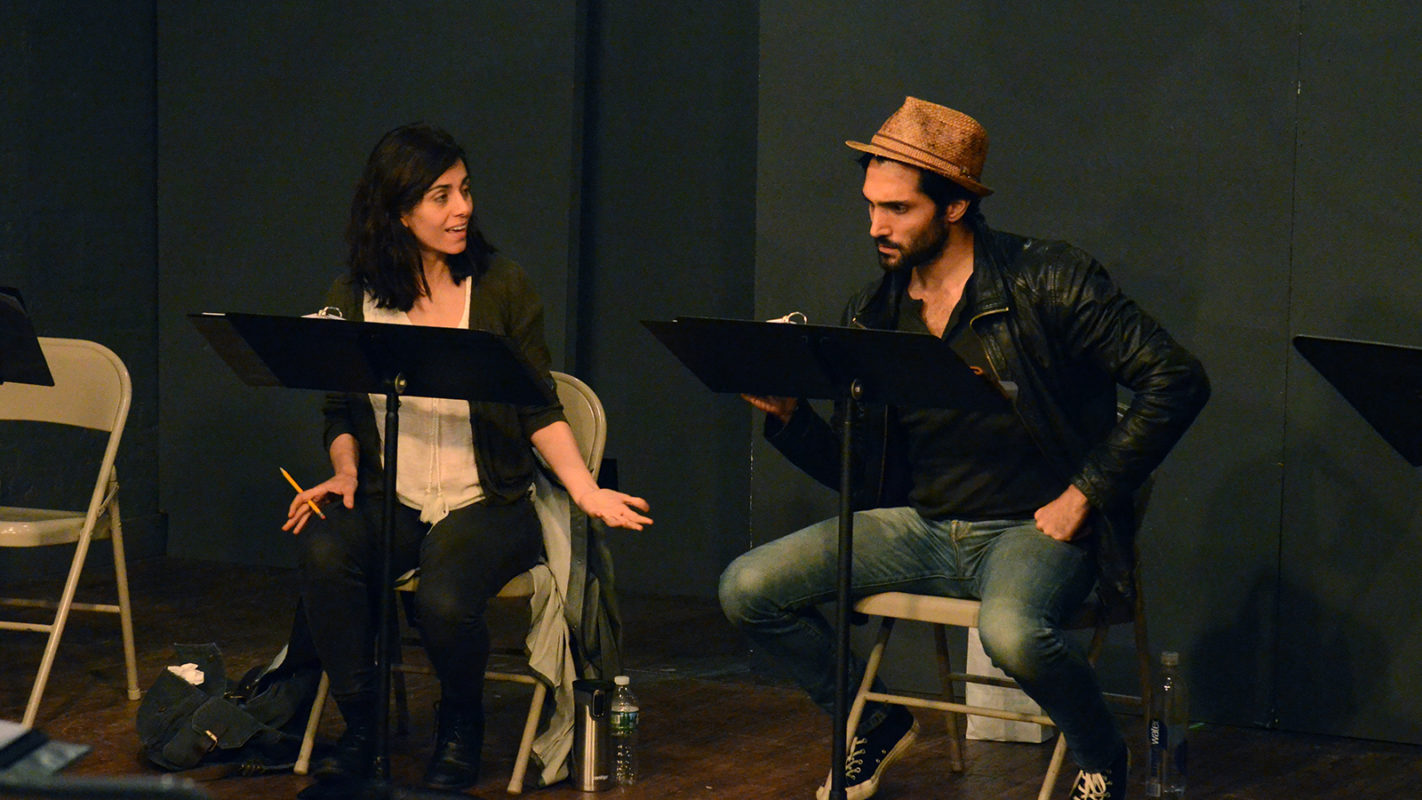 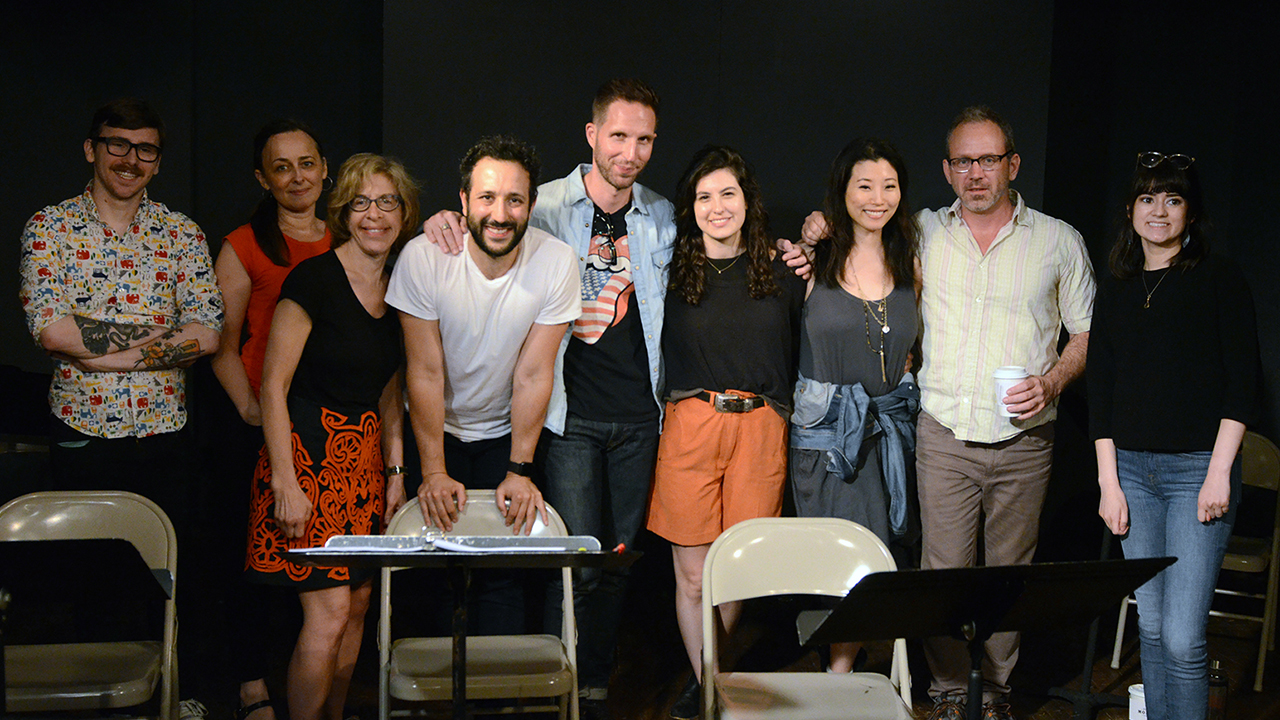 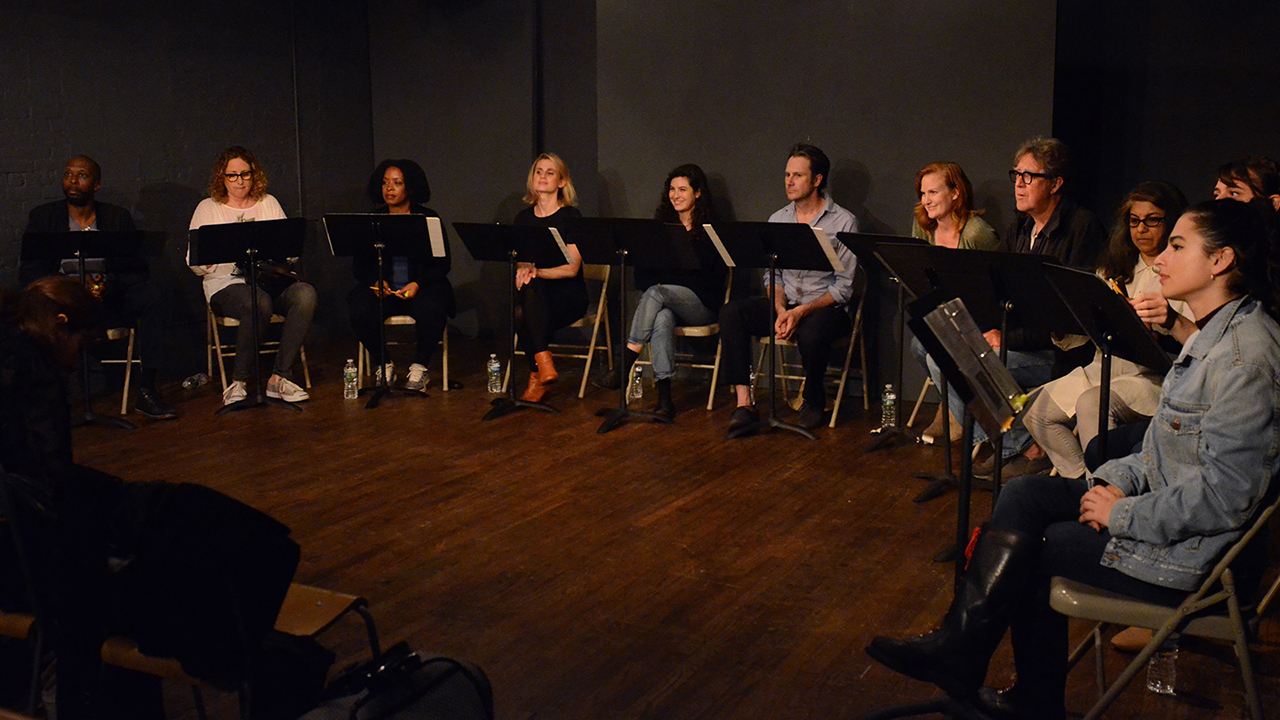 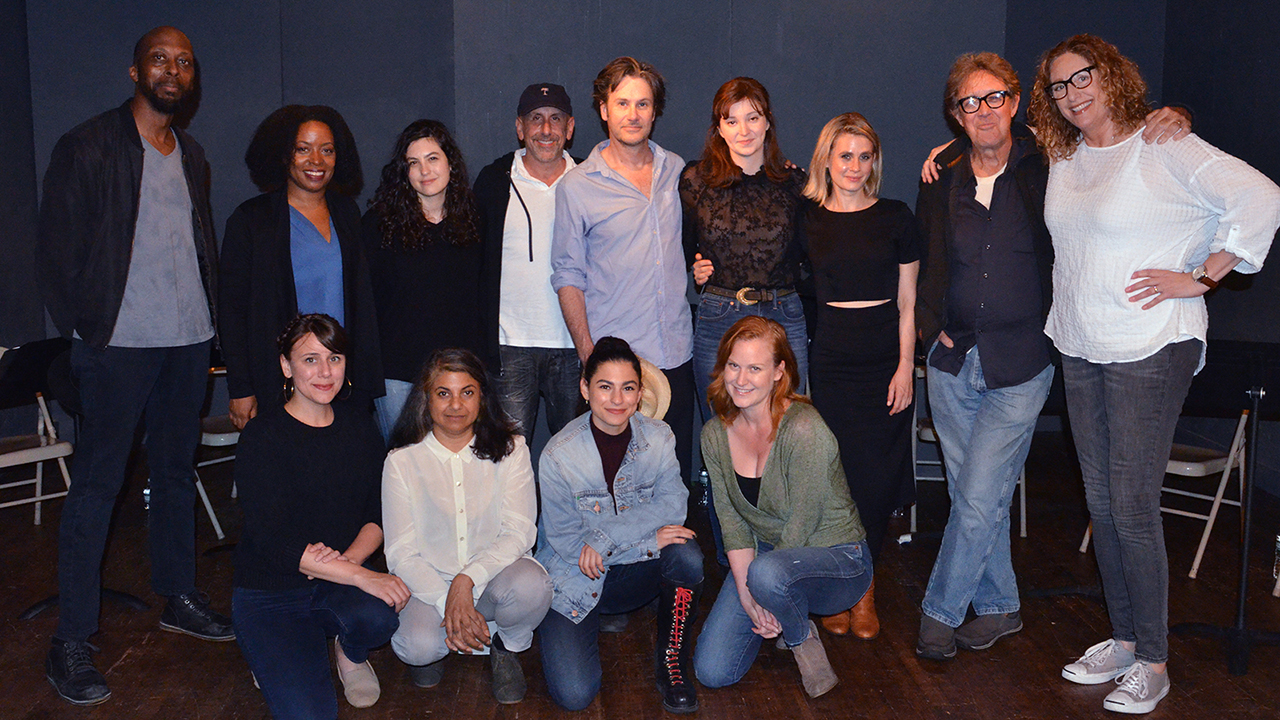 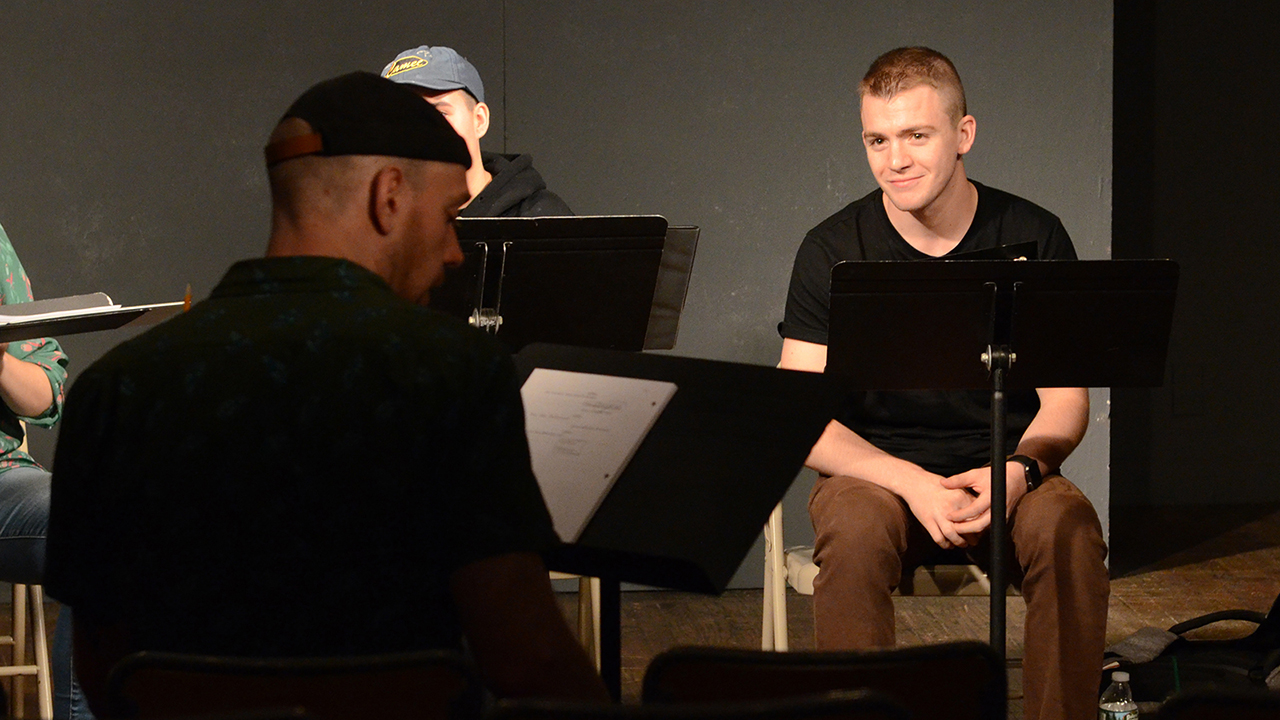 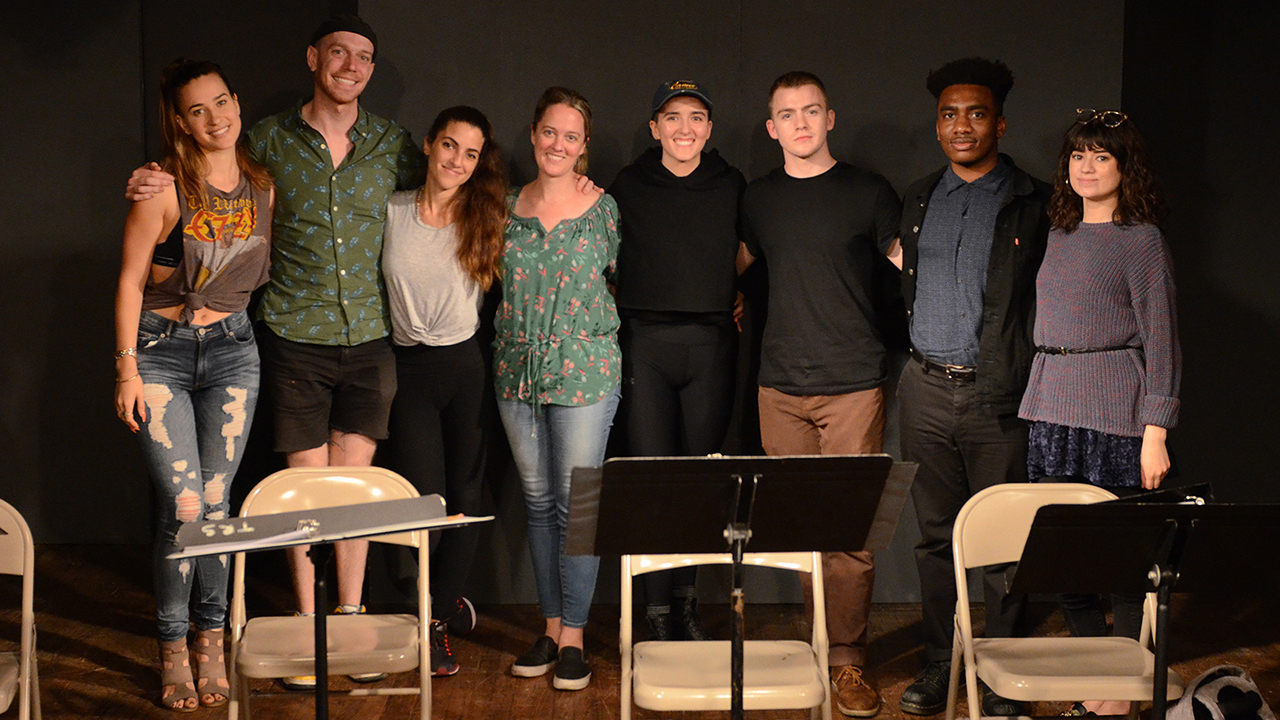 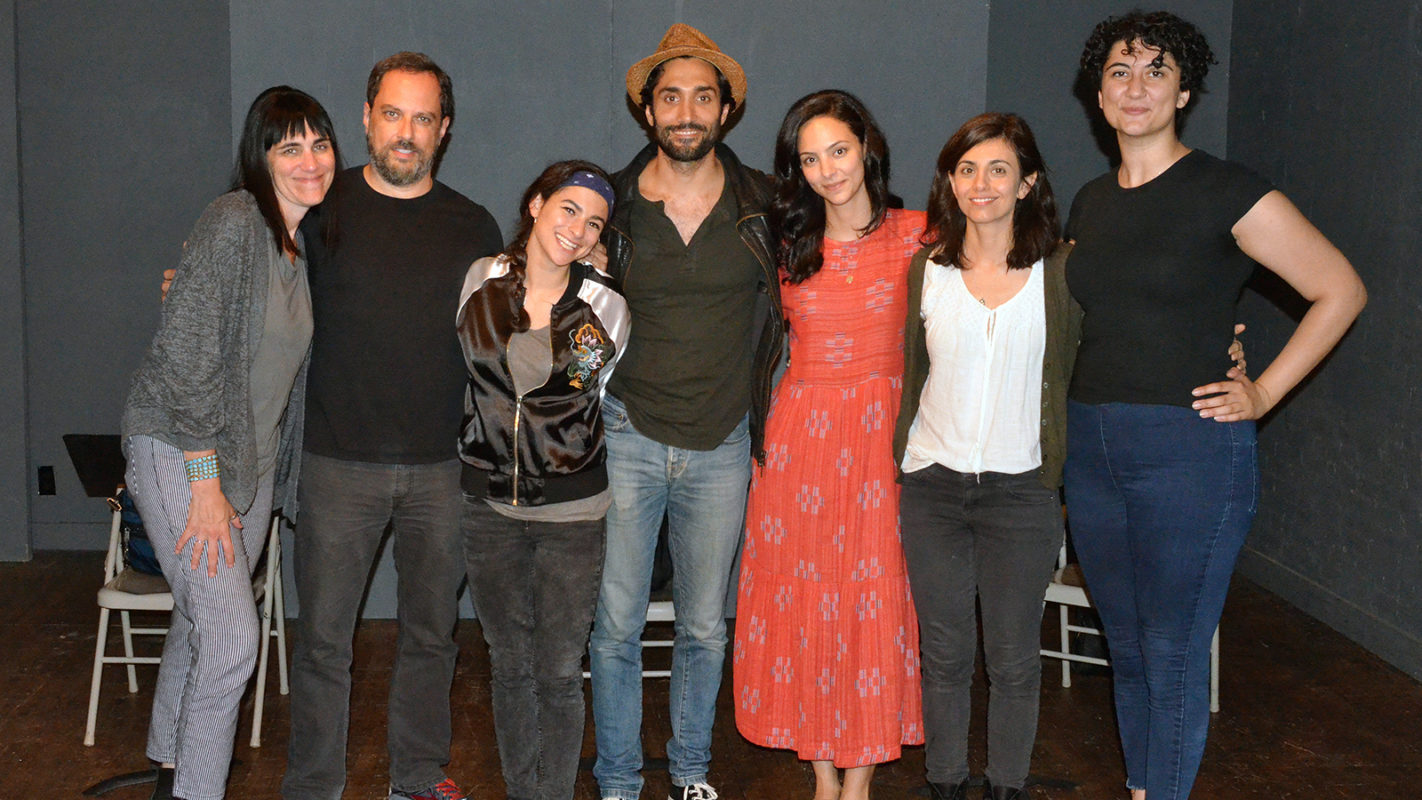 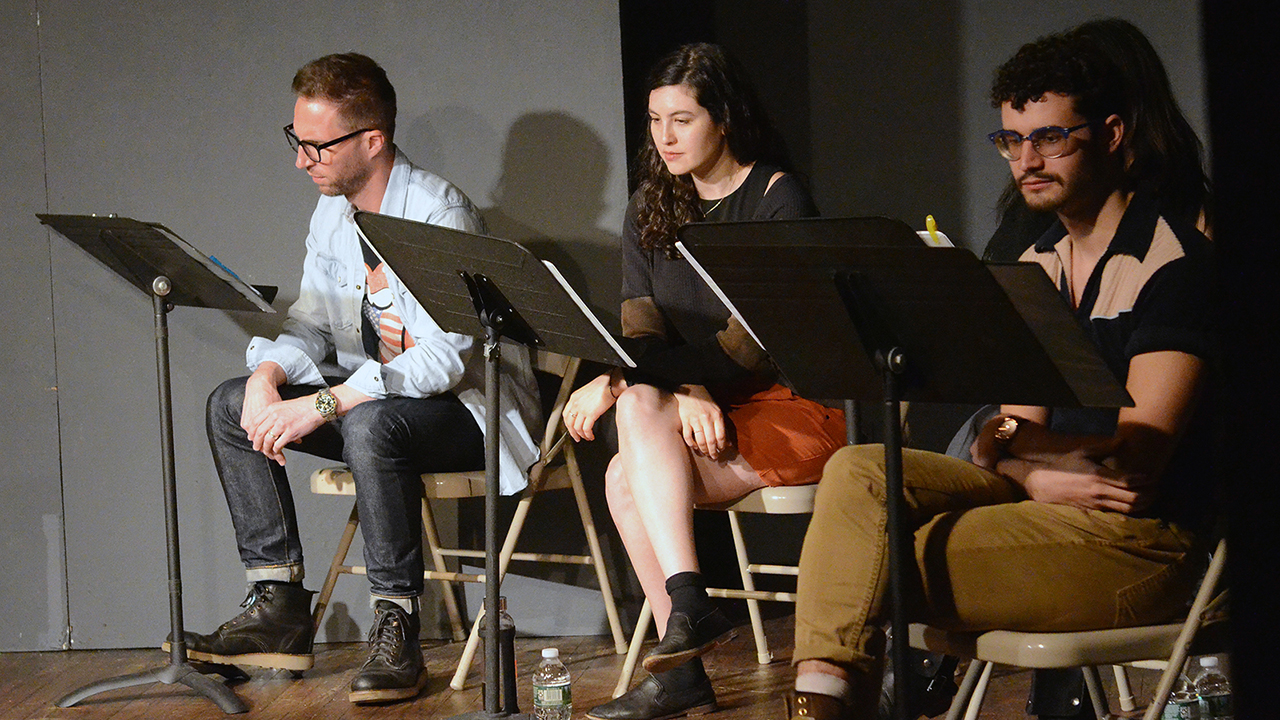 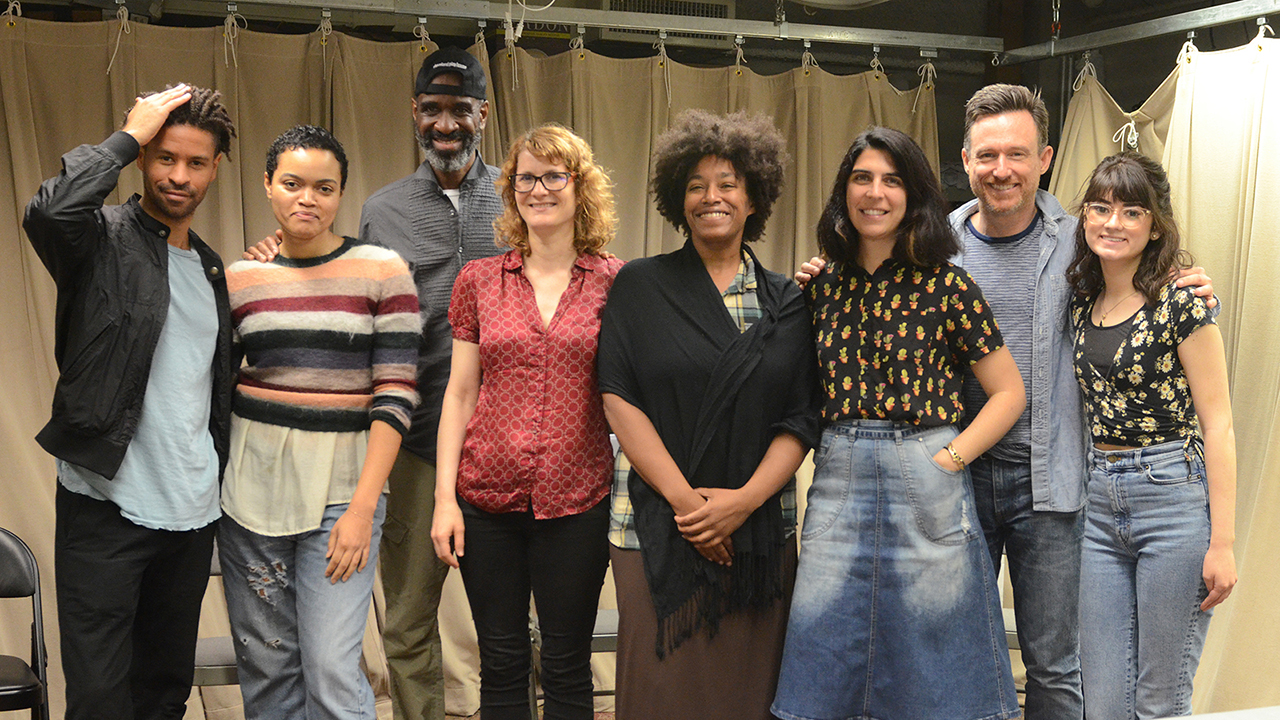 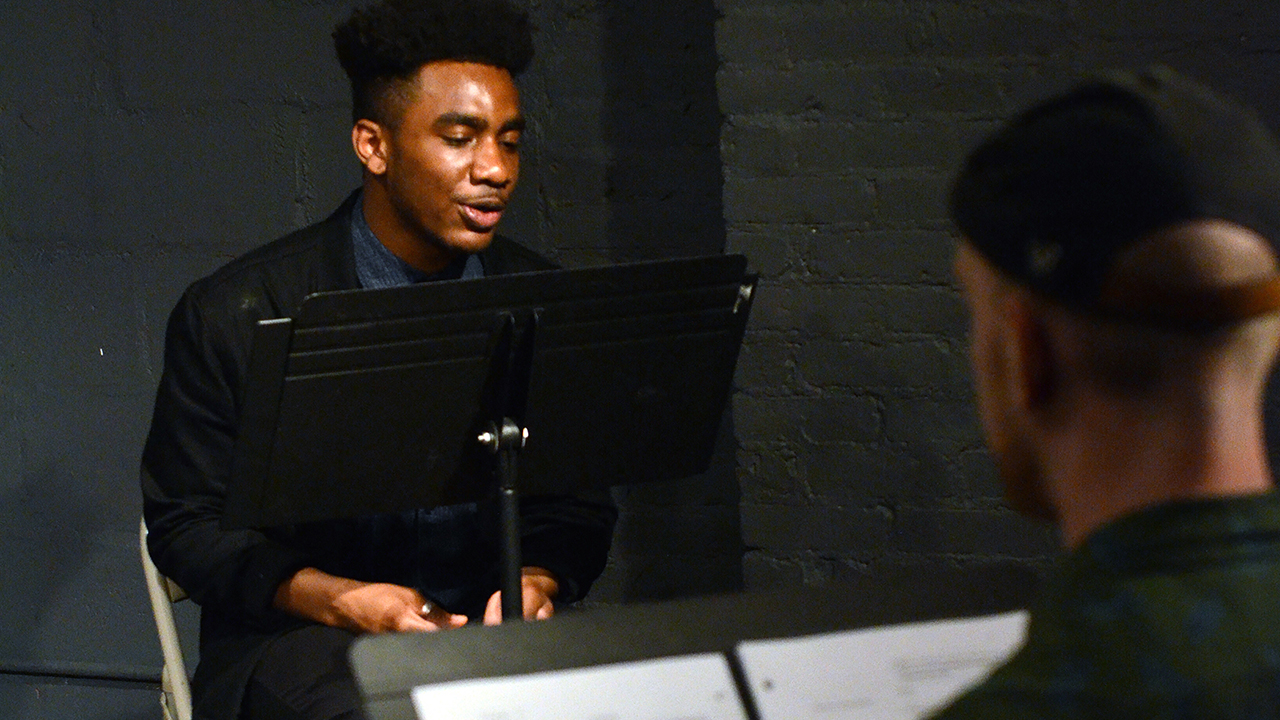 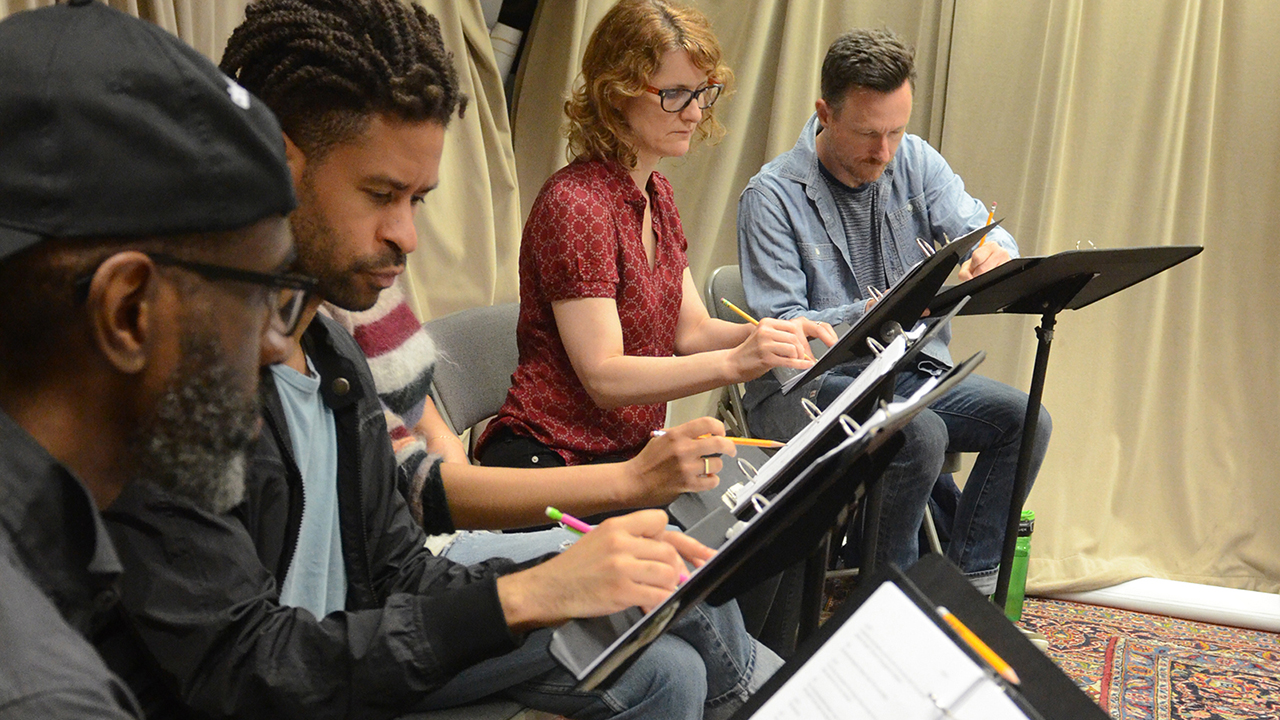 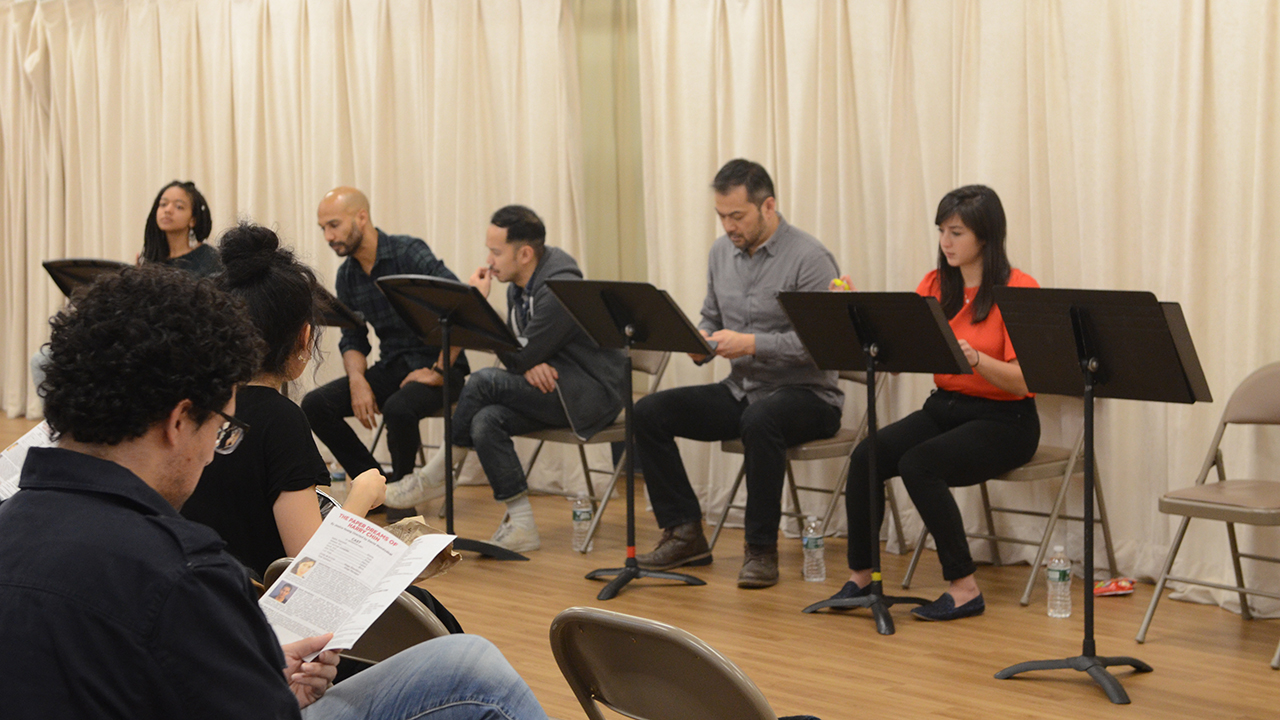 The Paper Dreams of Harry Chin by Jessica Huang. 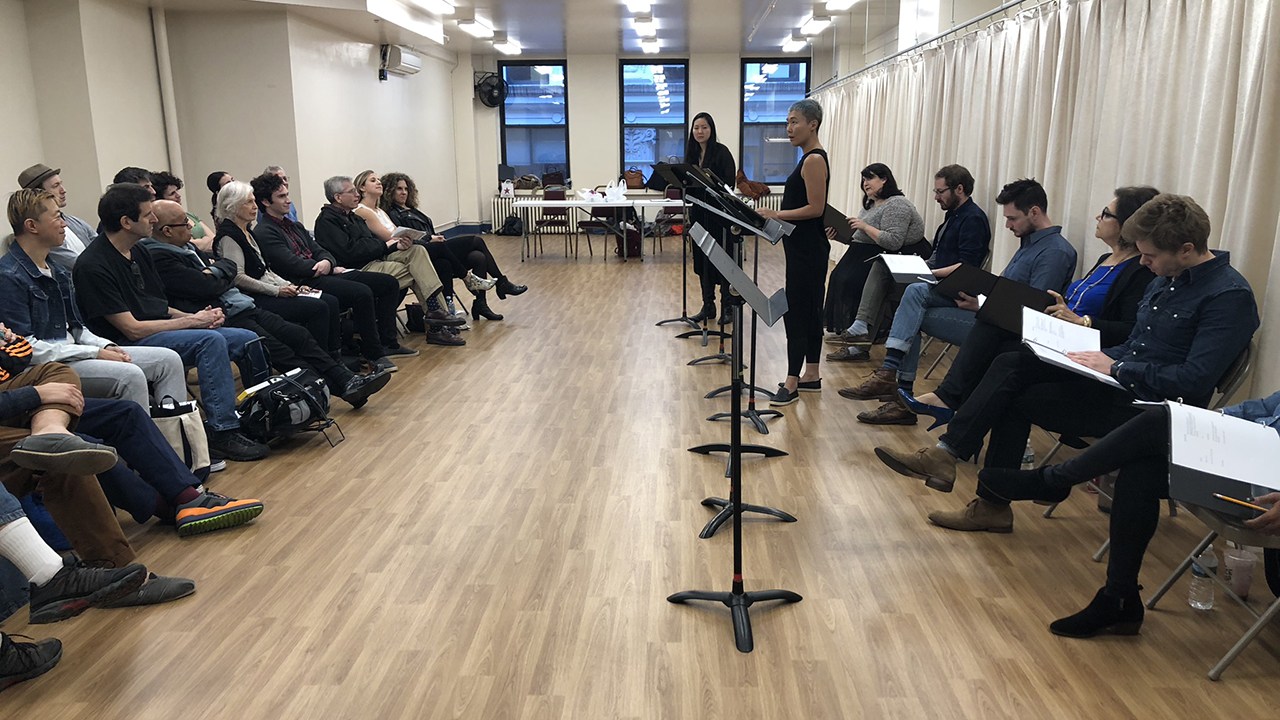 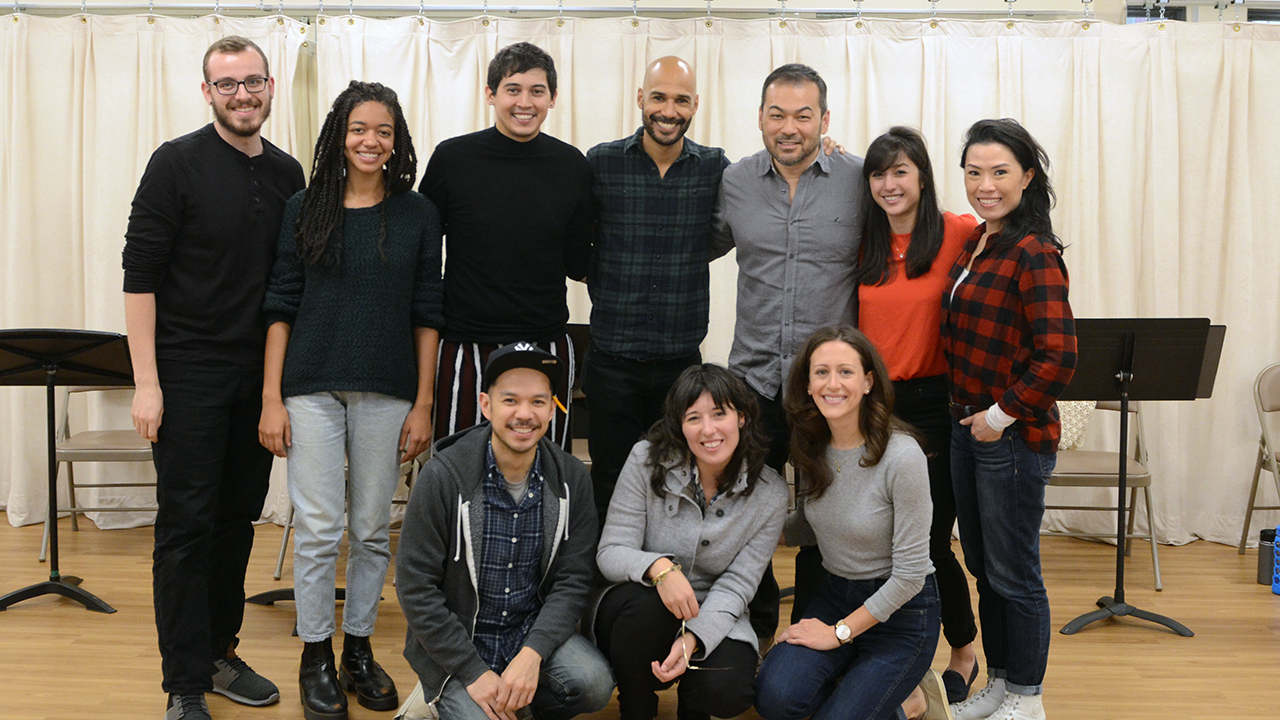 The cast of The Paper Dreams of Harry Chin with playwright Jessica Huang and director David Mendizábal. 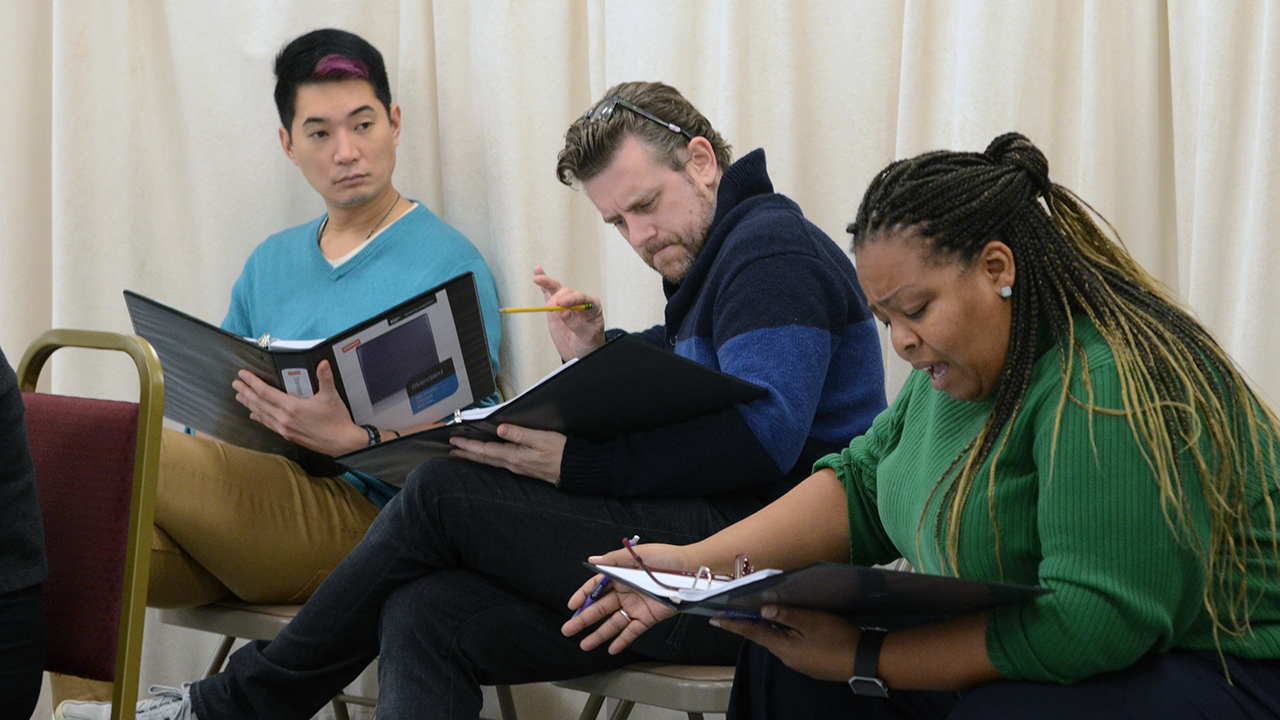 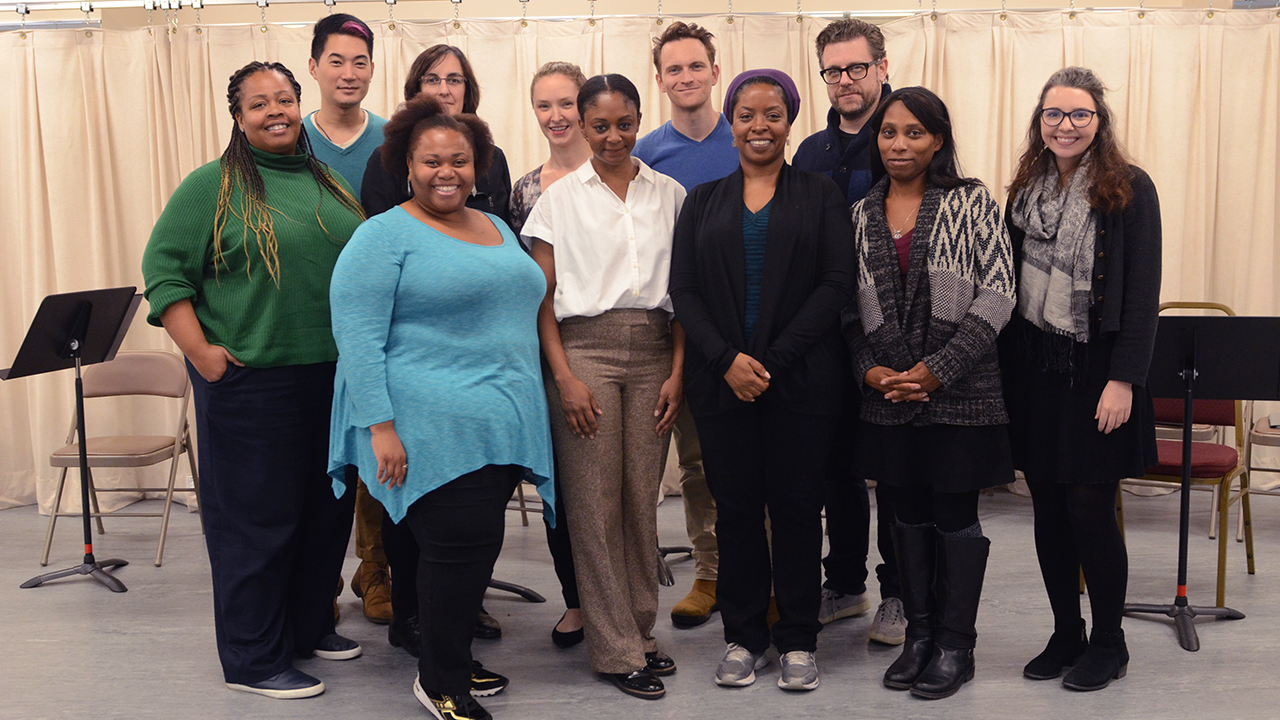 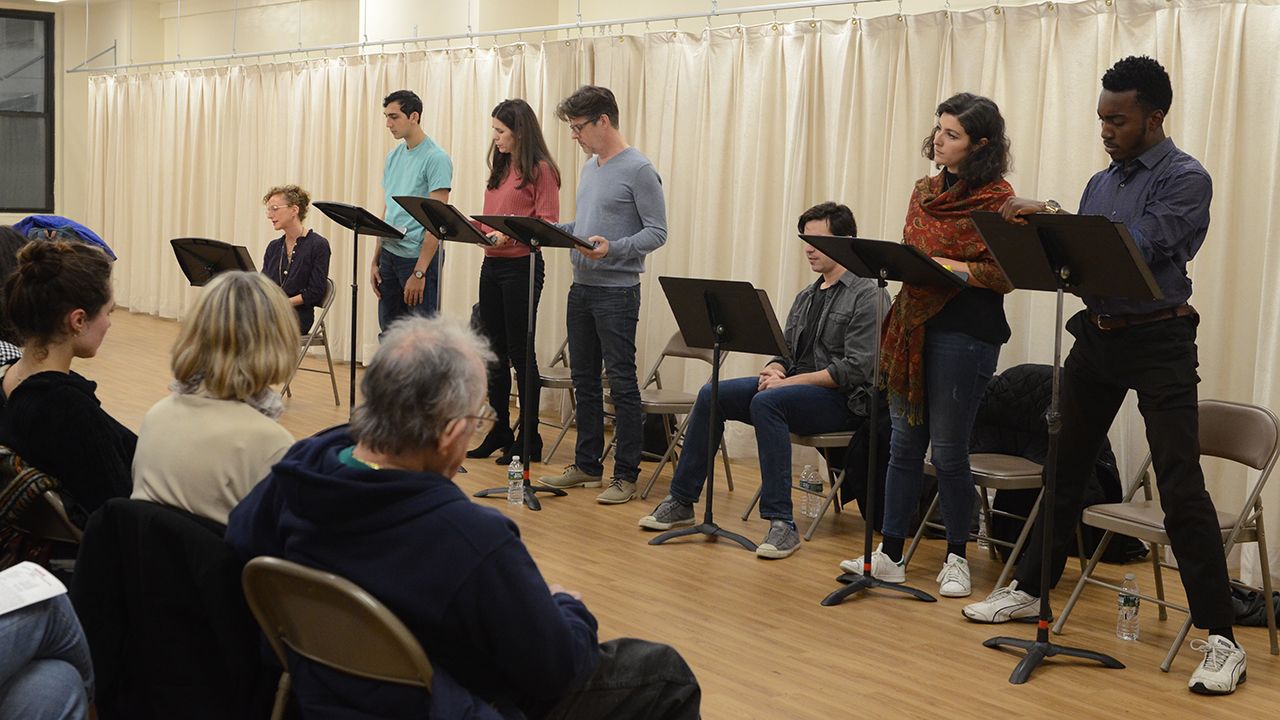 Reading of Manar by Melis Aker, directed by Whitney White. 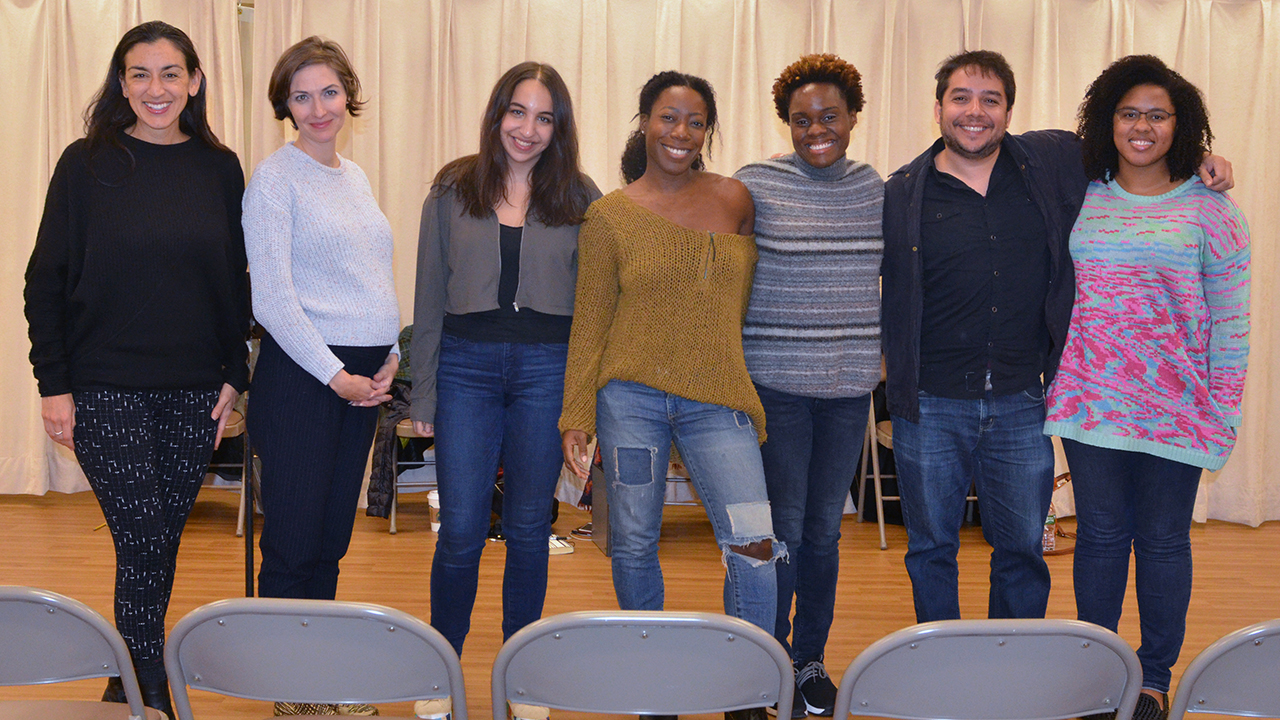 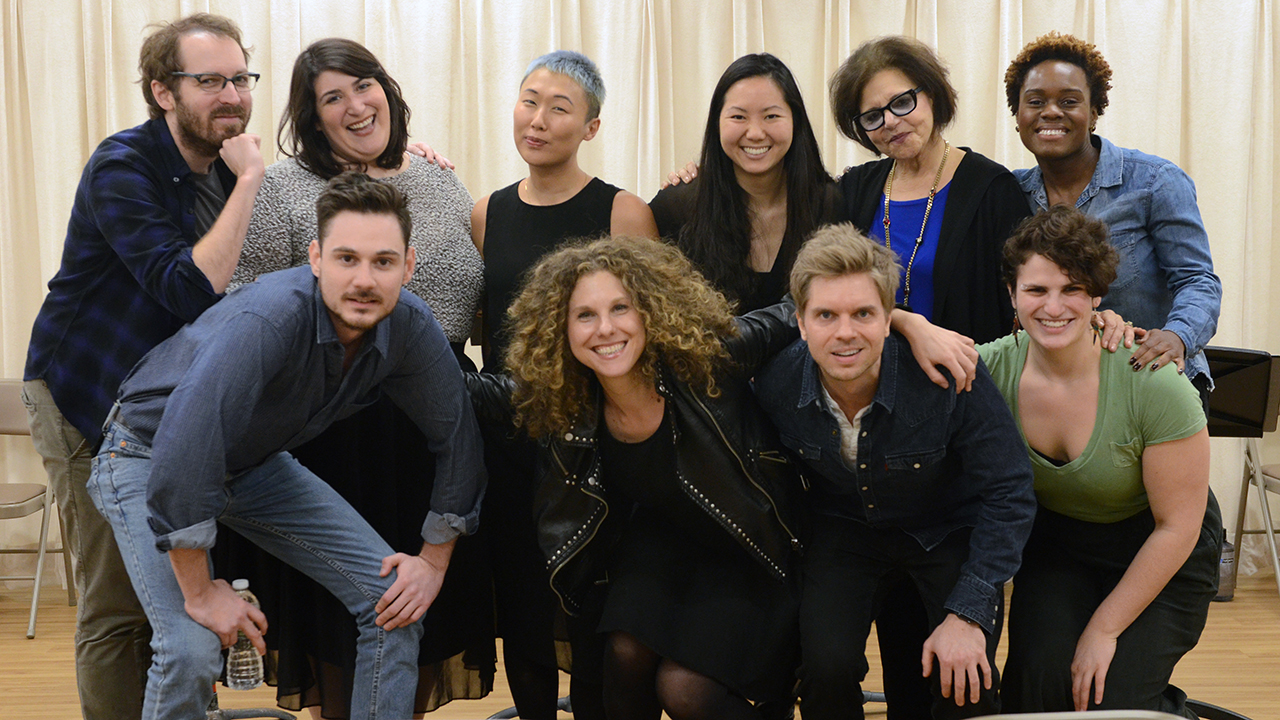 The cast of Pose with playwright Rae Binstock and director Ellie Heyman.

The Paper Dreams of Harry Chin by Jessica Huang.

The cast of The Paper Dreams of Harry Chin with playwright Jessica Huang and director David Mendizábal. 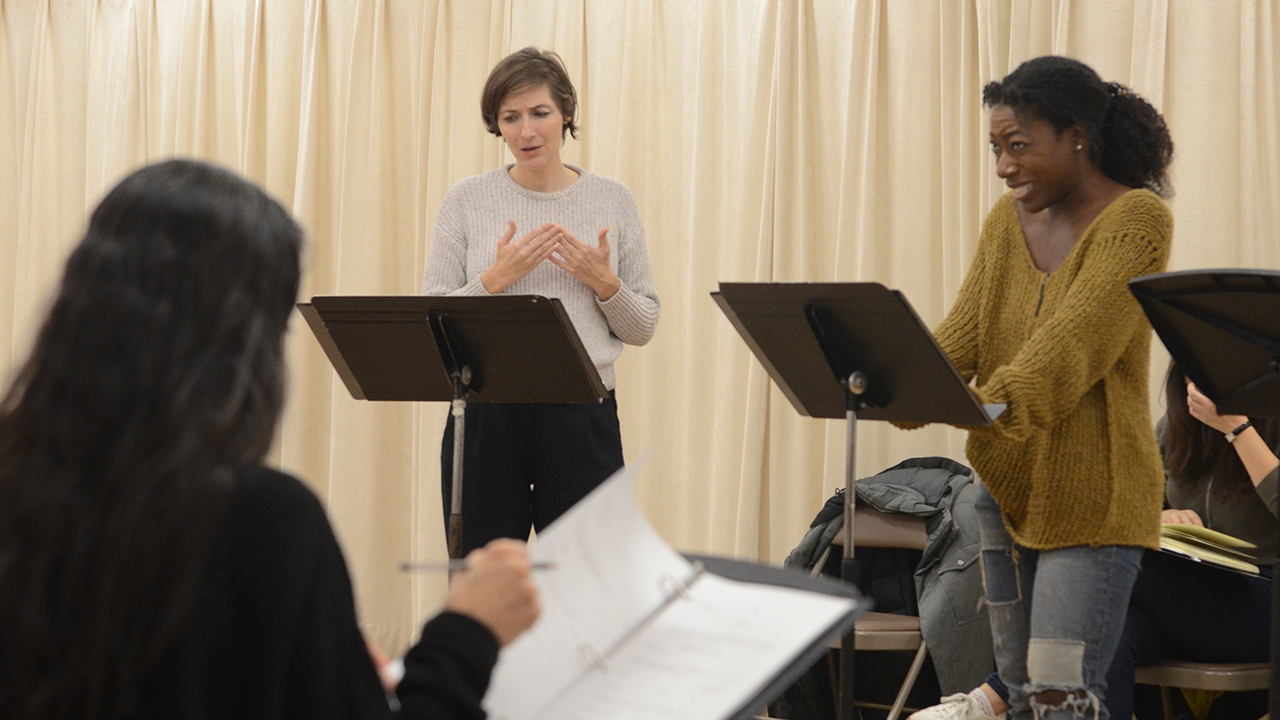 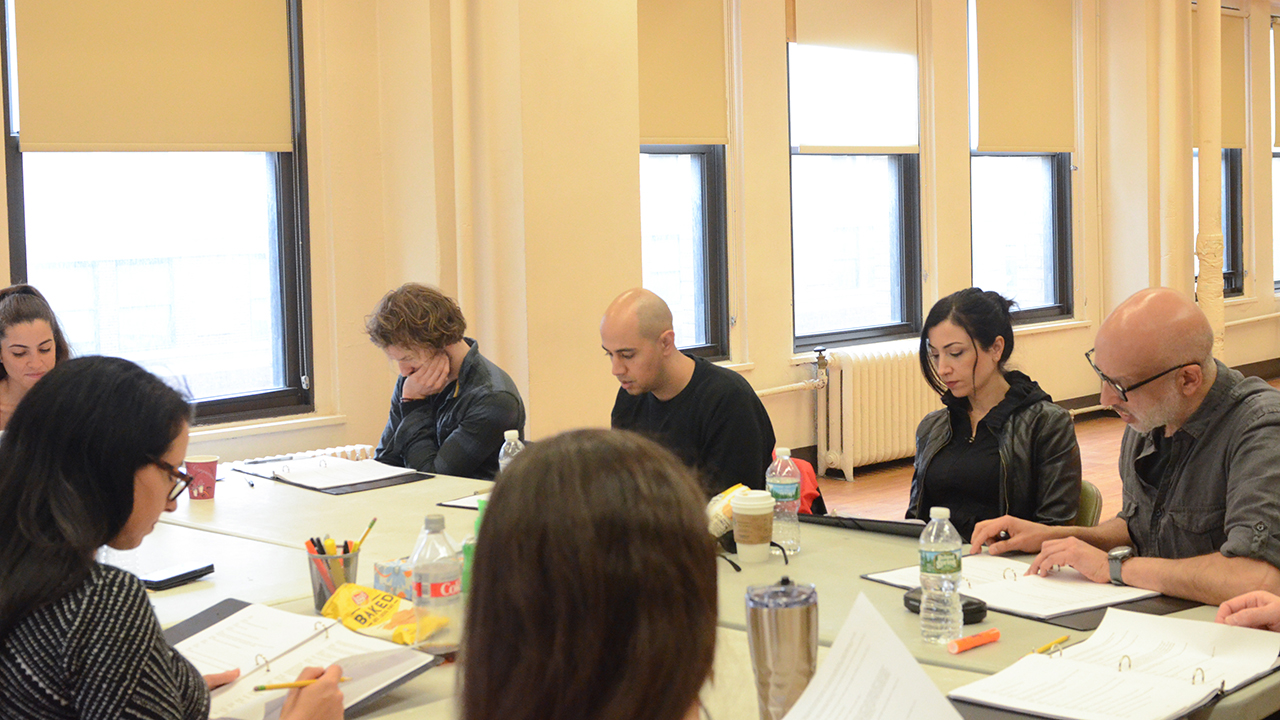 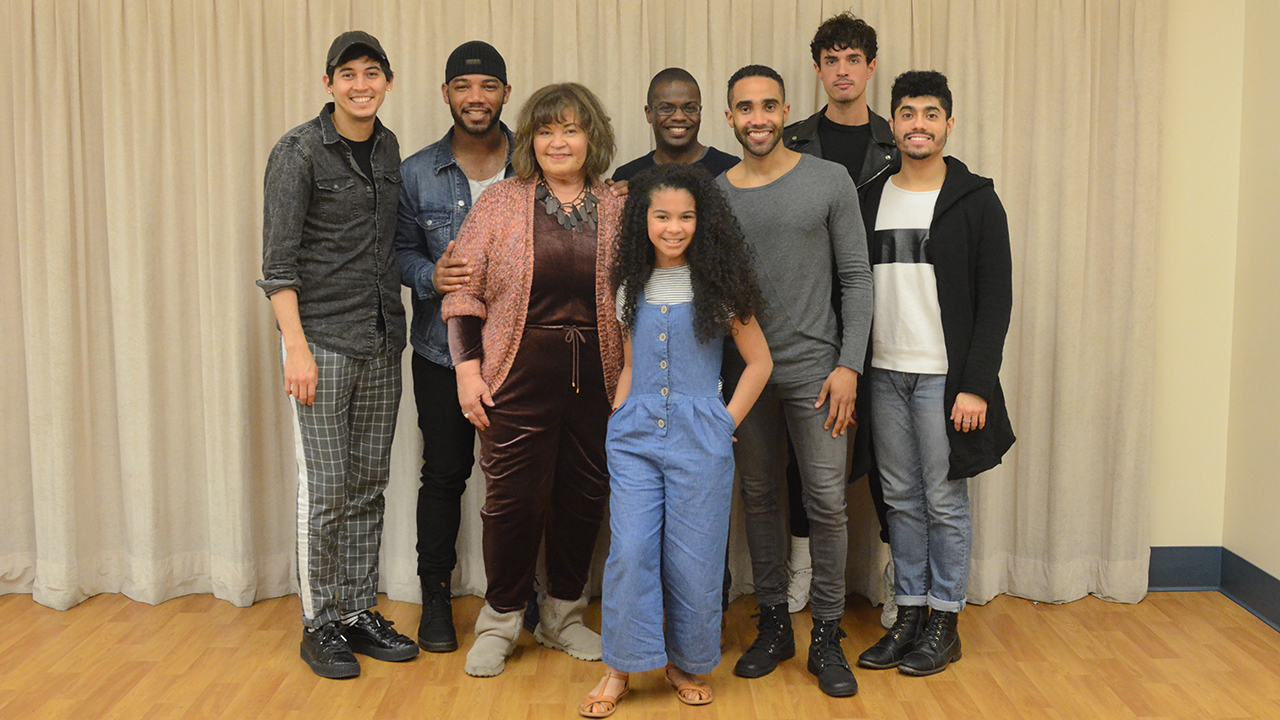 The cast of The Bandaged Place with playwright Harrison David Rivers and director David Mendizábal. 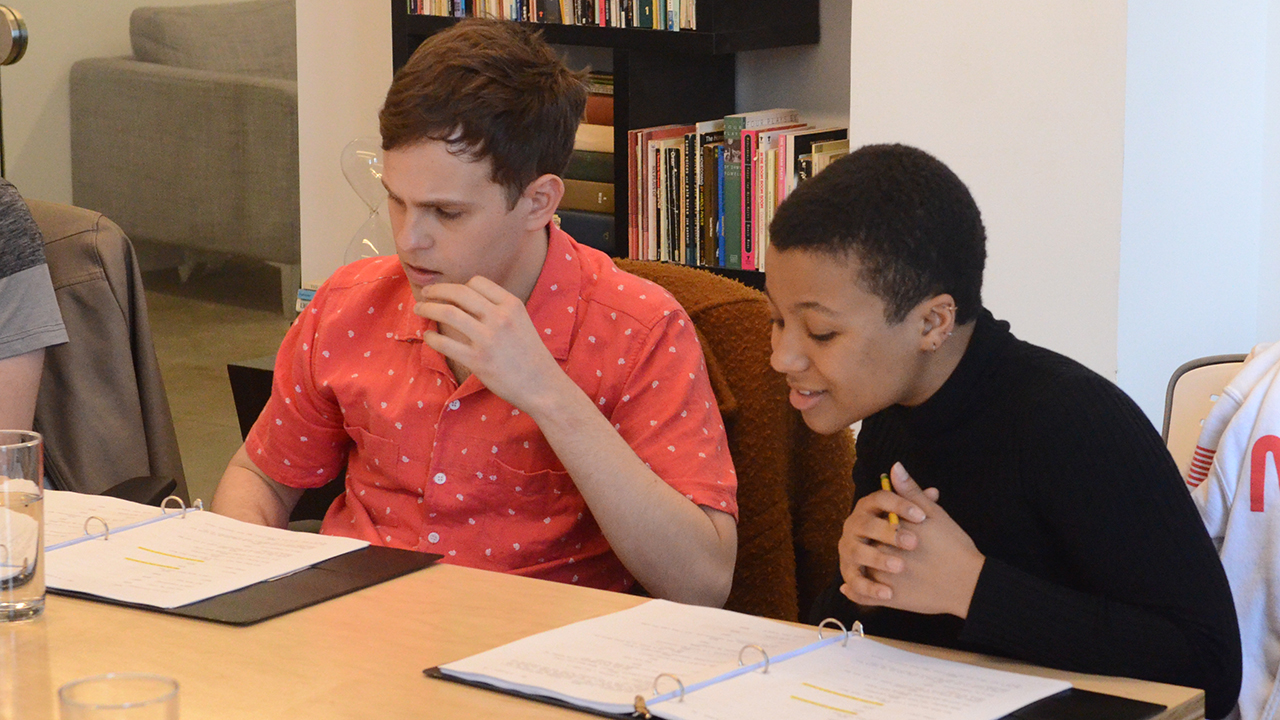 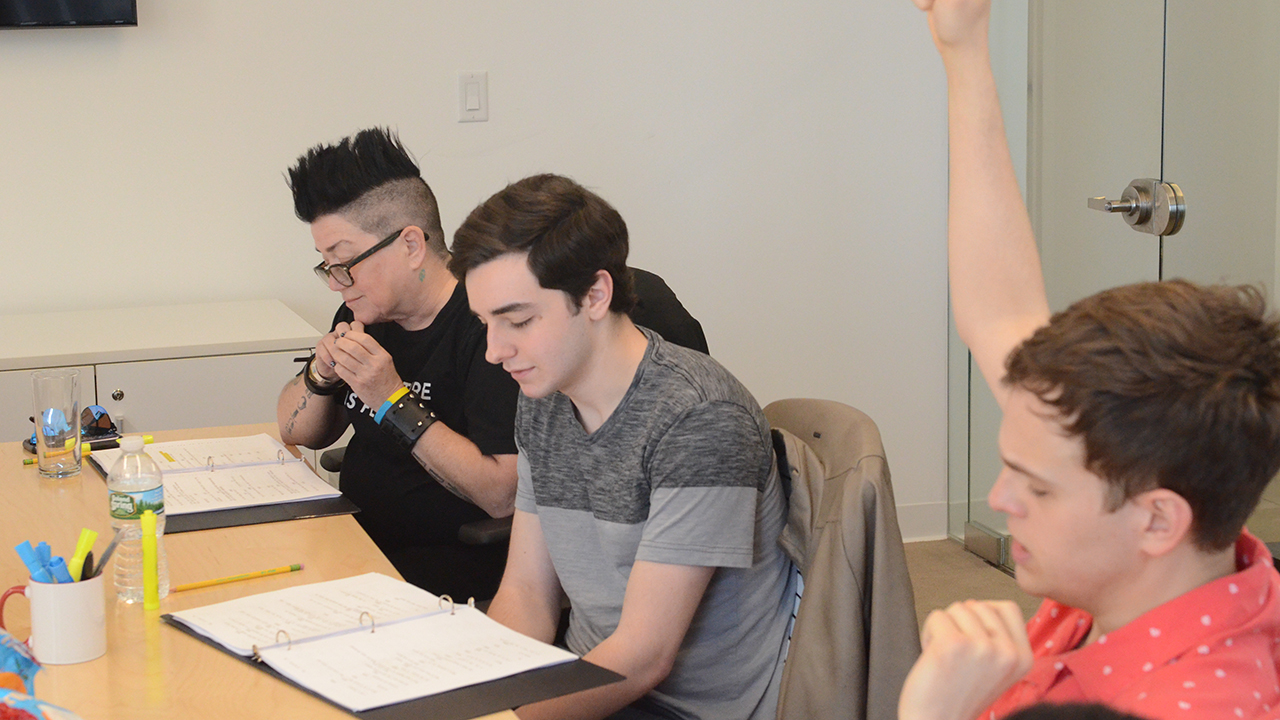 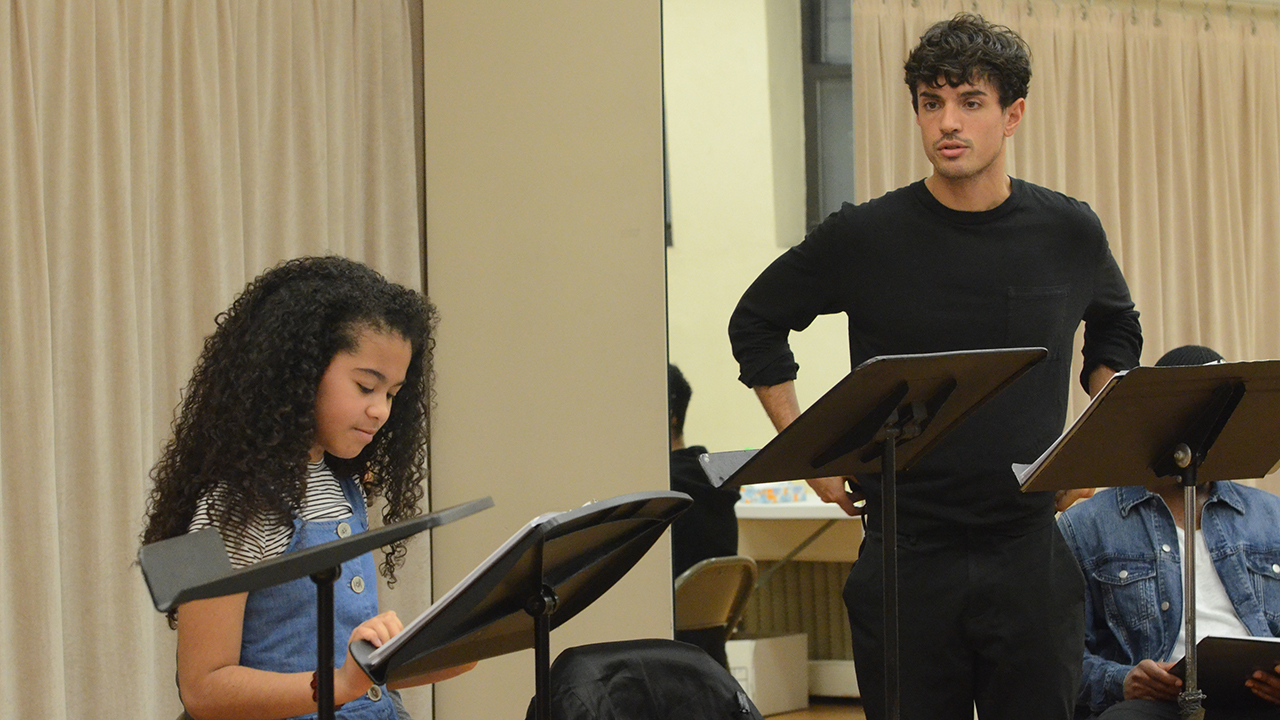 Reading of The Bandaged Place by Harrison David Rivers 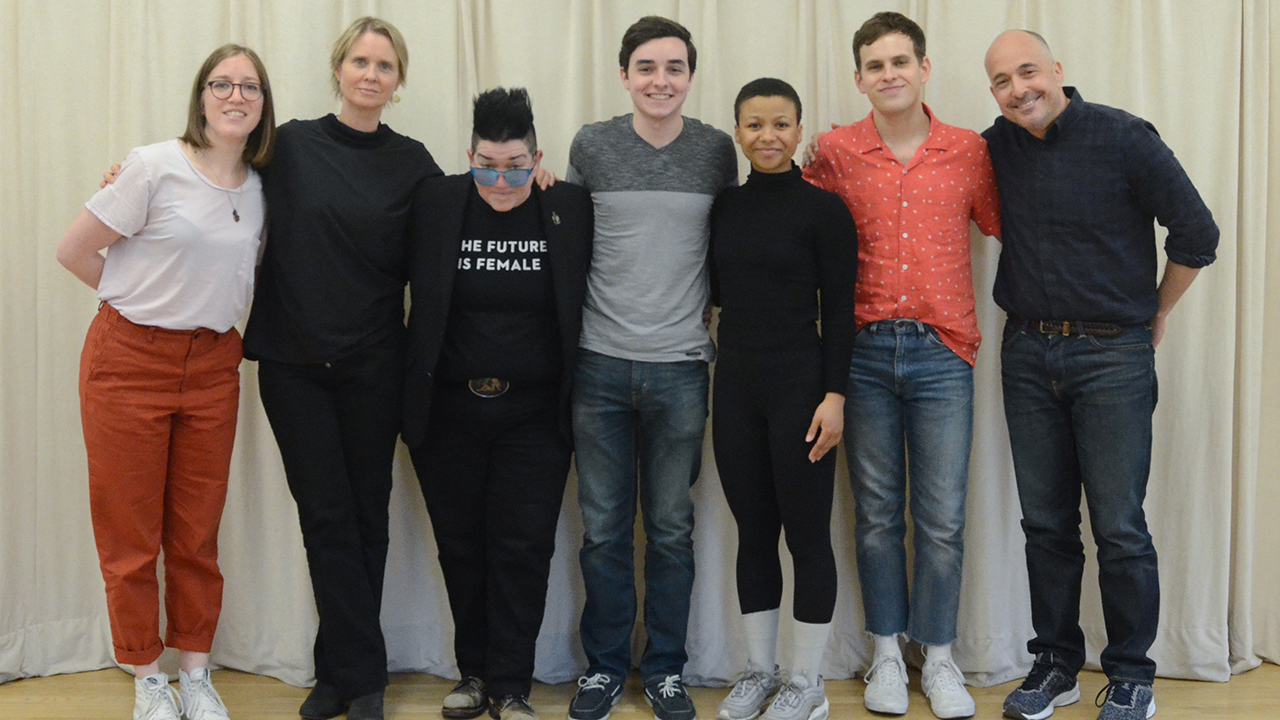 The cast of OK! with playwright Mark Gerrard and director Cynthia Nixon.

The New Group Off Stage and NRDC proudly present

Facing the Rising Tide:
A free digital festival of play readings and conversations about environmental racism, the climate crisis and hope.

With these online readings of new plays by five extraordinary emerging writers, we are celebrating the ways truly imaginative art can get our minds working in new directions around the climate crisis and the impacts of environmental racism. The playwrights’ characters are pressured by their circumstances to decide and act, and these stories, whether they are depicting real, recent crises or possible futures that we hope to avoid, let us locate ourselves and the choices we face in a rapidly, radically changing world.

In a small village, a man tells his wife that he will kill her unless she becomes pregnant. Inspired by a true story, CUT follows Jackeline Mwende on her feverish journey to survive in the face of violence, and what happens when she connects with an outsider who wants to help. Stacy Osei-Kuffour creates an endlessly imaginative, scathingly funny yet dark landscape that continues to surprise while taking a deep look at the compromises people make in order to endure.

Jonah is a dancer.
Jonah is injured.
Jonah has an ex-boyfriend.

A brutal and lyrical play about the things we hang on to and the price of moving forward, the bandaged place tells the story of one man’s attempt to free himself from the abuses of his past. Jonah is forced to turn to his precocious daughter and tough love grandmother for support when a former lover resurfaces, re-opening a painful wound.

Our Boy by Rob Urbinati
Directed by Kip Fagan
Wednesday, April 3 at 7pm

Mark is a small town “golden boy”, sporty, handsome, popular, kind. Or at least that’s something his parents can agree on. When he is implicated in something they could never imagine, they begin to realize how little they actually trust him, or each other. A potent look at the shifting sands of parenting and responsibility, and our deep confusion around teens.

Dearborn is a story of two unconventional Arab-American teenage cousins, who work together in their family’s gas station in the Arab section of Detroit. Sarai Ayoub doesn’t have the tools to combat harassment during an internship in the auto industry, until a troubled son of one of the most powerful men in Detroit offers her a chance at revenge. Amir dreams of being a comic, and can only hint at the truth of his sexual orientation within his comedy sets. A timely drama that explores the intersection of sexism, racism, and homophobia in the aftermath of the Me Too movement, Dearborn is the second part of a cycle of plays about Arab Detroit following Roar, which originally premiered at The New Group.

OK! was commissioned through a grant from the Blanche and Irving Laurie Foundation’s Theater Visions Fund.

After being bussed to a newly integrated high school, three friends find themselves straddling two different worlds and fighting to not get lost or lose each other. Poetic and visceral, this play explores the question of what happens to children caught in the middle of complicated adult fears.

The job of a figure model is simple: strip, pose, and whatever you do, keep still. But when Jiin, a veteran model, finds herself sharing the stage with Henry, an opinionated newcomer, her usual ways of holding herself together no longer seem enough. As lines between the two models are drawn, blurred, and eventually crossed, she risks being truly exposed.

In Dearborn, a white teenage boy fascinated by Islam has disappeared, and his mother is convinced that she sees his eyes behind the veil of an executioner in an ISIS video. His father tries to reach out to the Muslim girl and shopkeeper their son had befriended, which further ignites the cultural segregation between them, dredging up memories and paranoia that threaten the community’s fragile peace.

Lindy has three children, a teaching job that is gradually being cut back, and a white husband who just wants to abandon it all and live off the land – but she clings to her middle-class life by her fingernails. One day a white mom from their children’s preschool invites herself back to Lindy’s for tea, and the life she thought she wanted begins to look frayed and strange.

Harry Chin bought forged documentation, entered the U.S. as a ‘Paper Son’, underwent a brutal detention and interrogation, and lived his life keeping this secret from his American wife and daughter. Told through the eyes of a middle-aged Chin, in crisis after losing his wife, the drama uses dreamlike leaps of time and space and the powerful assistance of ghosts to portray the personal and political repercussions of making a group of people “illegal.”

Bobby used to be the biggest star on the biggest competitive reality show on television. Now he’s doing Valtrex commercials and fighting not to be forgotten. What happens when everyone stops watching? What do you do… after reality? A play about the American Nightmare.

On a crumbling, British housing-estate, teenage Jessa is struggling to make ends meet. Having just lost her job, and with her parents absent, she’ll soon be out on the streets. When she turns up at the door of her old tutor Debra, seeking shelter, her welcome turns into a dangerous co-dependence that begins to unravel both women’s lives. Lover Think Lover is a dark and thrilling examination of intimacy under psychological and social pressure, and the lies we must tell ourselves in order to survive.

In this crafty dark comedy set in a skin cancer outpatient surgery, a group of people wait together to be called into the room alone – and then wait some more, and be called in again, each time coming out a little lighter, physically if not spiritually. A day in the life of these bodies sharing a hilariously terrifying experience, helping each other in whatever way they know how.

Taroon once served as an interpreter for the US military. Now the Americans – and their promises of safety – are gone. Hiding from reprisals in his sister Afiya’s apartment, he can’t even go to his son’s birth. With no good options and time running out, they must navigate a country left in upheaval, where each must fend for herself and few can be trusted.

Lucy and Clay, black Muslims from Detroit, move to a small – and very white – town in Indiana for jobs at the local university, and meet the well meaning working class couple next door. When Lucy asks Clay to fence in a garden plot that may touch the property line, the best of intentions on both sides can’t prevent buried feelings from spilling out.

This work was commissioned by the Virginia B. Toulmin Foundation.